It’s become a common practice to keep one’s dotfiles version controlled, oftentimes mirrored somewhere like Github. A lot of people start their own dotfile collection based (forked) off of someone else’, but that never felt right to me. In my view, dotfiles are personal, sensitive configuration files that are explicitly defined to one’s own taste. It never made sense to me to want to use a giant wad of files with who knows what configuration directives in there. It seemed a lot like cargo culting to me.

I do enjoy looking at other peoples’ dotfiles from time to time to see what I can pick out and adapt to my own, but otherwise I like to grow mine organically—that is, only configure what I need, as I need it—to ensure that I really understand my configuration. As a result, I created my own dotfiles from scratch.

The file structure is pretty simple. There’s a folder for every type of dotfile collection, for example: zsh, git, vim, and so on. Each of these can contain hidden files and folders that can be deployed by the deploy script.

My deploy script is called sprinkle, which is a heavily modified fork of the deploy script from holman’s dotfiles. I chose this script to start from because I liked that it was a shell script, unlike most other deploy scripts I had seen which were Rakefiles, naturally requiring Ruby to be installed on the system before being able to deploy the dotfiles.

I also liked that the deploy script had a naming convention such that files and folders with a .symlink suffix were those that were deployed. However, I didn’t like that vim and Github wouldn’t detect the filetype—and therefore wouldn’t highlight—due to the misleading file extension. So I ended up heavily customizing the script.

Now, instead of the .symlink-suffix naming convention, those files and folders that should be deployed are themselves hidden. This allows vim, Github, and others to detect the file type and provide highlighting. Running the deploy script for the first time yields something like this: 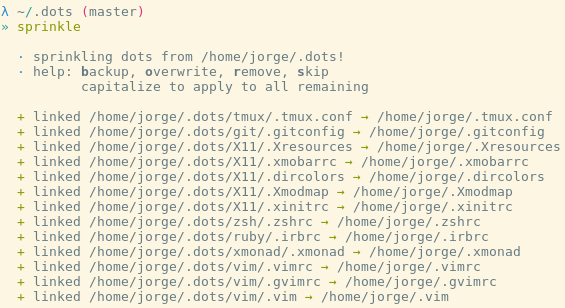 My zsh files have an alias for the sprinkle script so that it can be run from anywhere, though in this case I was already in my dots directory. Files that haven’t been deployed are immediately deployed (symlinked) unless there’s an existing file in the destination. In that case, there are options to backup, overwrite, or remove (without deploying) the existing file, as well as skip that file altogether.

These commands are entered when prompted by simply entering the first letter of the action, i.e. o for overwrite. A capitalized letter performs that action for all remaining files as well. This is what the prompt looks like:

My tmux configuration is pretty simple I think. I keep the bind at C-b though it kind of interferes with C-f/C-b scrolling, in which case there’s a bit of lag for C-b unless I tap it twice. Instead I’m getting used to scrolling with C-u/C-d though it’s pretty disorienting starting out.

My window list is pretty subtle I think. Active windows are underlined and the current window name is emboldened.

I have binds for creating new windows with M-n and renaming a window with M-r:

My zsh configuration files are created from scratch as well, I don’t use something like oh-my-zsh for the same reasons that I stated in the opening paragraph. I do use antigen, which is similar to vundle but for zsh, mainly to avoid having to either keep stale snapshots or juggle git submodules of zsh plugins I use. I only use two zsh plugins: syntax-highlighting and extra/community completions.

I then have a separate zsh sub-folder that stores zsh files that configure different aspects of zsh, such as aliases, completions, functions, bindings, and so on.

One of my most used aliases is :q which is simply aliased to exit, making it very natural for me to exit shells. If pacman is present on the system, I create many aliases to different kinds of pacman commands, such as pacup for pacman -Syu, pacin for pacman -S, and so on.

There’s nothing really special about my completions configuration. I do set it up to use my dircolors setup, so that the completion menu uses the correct colors for the different kinds of files. I also set it up for case-insensitive substring completion, so that I can type a bit of text from anywhere in the filename, regardless of case, and have it tab-complete correctly.

I do have a few functions I find to be very useful. The first is one that opens up a man-page directly to a given flag, i.e. manf ls -l opens the man-page for less directly to the point that describes the -l switch.

Another one of note is one I found on stackoverflow which basically prepends a column to ls -lh which contains the permissions of the files in octal/numerical form. I let this take the place of the regular ls command, which can still be run for whatever reason by prepending it with command:

I also created a wrapper around the built-in cd function that accepts parameters of the form b... where the number of dots is arbitrary. If the wrapper detects a parameter of that form, it removes the b prefix and expands each of the dots to ../. This makes for very quick navigation up an arbitrary amount of directories. The actual change-directory work is delegated to the original built-in cd function:

I also have a function for listing the pacman orphan packages on my system, i.e. those that aren’t required by any other package. I found a command for doing this but it just dumped a list of every package, so I modified it to also list the description of the package. This requires the expac package, a utility to query the pacman database:

Finally, another function I recently created that I find very useful is one to fetch my external IP address and both copy it to my clipboard and print it out to the terminal. This is very useful because my IP address does change from time to time, usually if I restart my router. Considering that I host a mumble and syncplay server, whenever this happens I have to inform my friends of the change, which usually requires me to manually determine my external IP by going to some website that provides the information.

So I decided to create a command that gets the IP address from ipinfo.io, copies the response to my clipboard, and also prints it out to the terminal.

In the past, one would use a command such as ifconfig to list the computer’s local addresses. Recently there has been a shift to use the new ip command which houses many sub-commands such as ip addr which is now the preferred method to list addresses.

So what I did was create a wrapper for this ip command and create a fake sub-command called get which performs this task of retrieving my external IP address. If the sub-command get wasn’t provided, then the wrapper delegates the work to the actual ip command, if it exists.

I setup mode-aware cursors in zsh, to better emphasize when I’m in vi mode and not. This is pretty straightforward, simply sending the correct terminal control sequence:

tmux did implement functionality for it to remember the cursor color on a per-window basis back in 2011, but this is only configured out of the box for xterm, since every terminal’s control sequences may vary.

When one runs a command that doesn’t exist, it generally gives an error pointing out that fact. However, the pkgfile package provides a zsh script that, when sourced, provides information about which package such a command may be found in.

I also configured highlighting for the less pager.

My prompt is pretty involved and it’s discussed more in-depth in my customization post, though it’s slightly outdated. See my dotfiles for the latest configuration.

One noteworthy thing however is that I highlight the path separator in a subtle cyan.

My vi-binds are pretty straightforward. One noteworthy thing is that I bound _ and g_ to go to the beginning and end of line, respectively, to reflect what I use in vim.

I also created some binds specific to the completion menu. I bound shift-tab to go in the reverse direction of tab. I also changed Enter to accept and enter the command, instead of the default, which only accepts the completion and allows the user to continue typing the command. Instead, I bound C-g to perform the accept-only:

My vim configuration is discussed in other posts, such as this one. Some noteworthy things are my mode-aware cursors which you can see here, where my statusline is also discussed. They’re basically color-coded based on the mode. I also made all of the cursors be the block cursor, rather than I-beam for insert mode as is default. I also disabled cursor blinking:

I also enable the cursorline only on the current window:

Instead of letting CtrlP generate the list of files, which can be slow, I delegate this work to find and dir on unix and windows respectively. If we’re within a git repository, then I take advantage of git ls-files to do this instead.

All in all it’s a pretty simple dotfiles system I think. Feel free to take a look through it to see what you may like to adapt to your own configuration.